Home » How Blockchain is influencing the Modern Social Media Networks?

Social media networks like Facebook and YouTube are the top social networking websites. Their nonstop growth has moved the markets on top and made them some of the wealthiest companies in the world. The social media websites are being used as an ad sale, but recently Facebook 87 million user’s data had been mishandled which potentially subjected to biased and manipulative advertisements, which puts social media to shame.

For a social media marketer offering services to businesses or a business owner using social media to reach customers, it is understood that social media is about to go through a dramatic shift.

Blockchain technology is disrupting many industries, and social media is one of them that are likely to feel the ramifications of blockchain disruption first.  All companies are taking the help of social media platforms like Facebook, Twitter, and LinkedIn for branding purposes but they realize that there is no outcome. As the blockchain swells in popularity and usability, new platforms are creating a secondary social media network that will compare many of the features of the most popular sites.

Social networking channels are increasingly turning to a new era of verifying online identities. With massive bot issues on social media platforms like Twitter, Instagram, and Facebook, marketing is going in a negative way. Influencing or marketing to the  customers who have verified their identities through blockchain technology and smart contracts is extremely useful for business owners who don’t want to carry out a deaf tone of social media campaigns based on fraudulent PPC ad impressions. 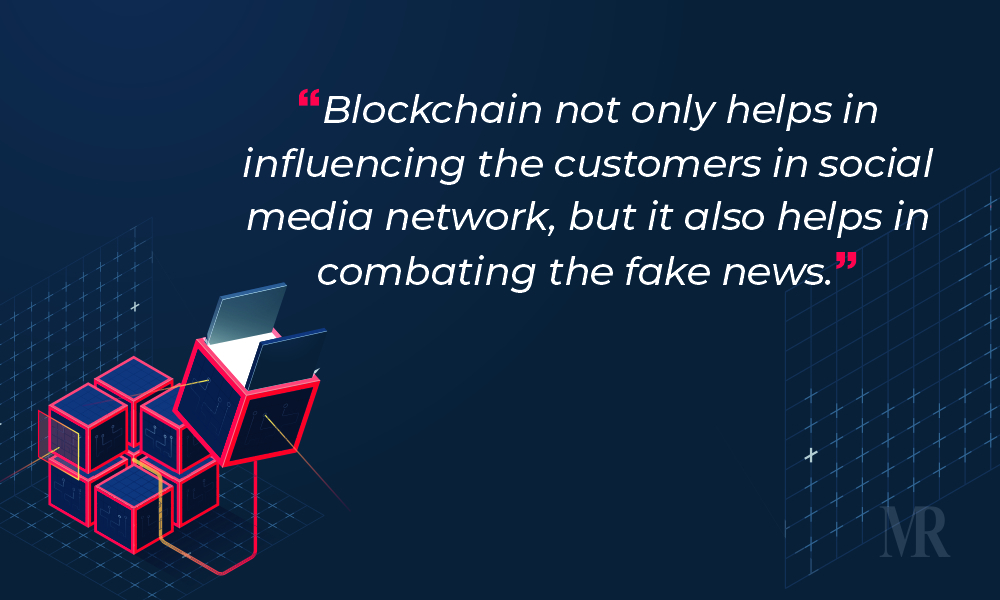 Blockchain not only helps in influencing the customers in social media network, but it also helps in combating the fake news. In today’s social media network, fake news and spam bots are predominant. Content distribution is based on verified information and spreading of traceable data. Understanding the potential of blockchain-based SMM is the way to earn in today’s era that is the reality. A blockchain approach to social networking addresses is establishing a unique approach to connect the customers. By getting rid of the main server, there is no single entity that can enforce such monitoring and controls over user-generated content.

Blockchain has been used to disrupt how one thinks about data. Blockchain platforms decouple data from platforms. The latest platforms like BlockStack decentralize the data and use it in its new ways to empower social media users in general and social media marketers in particular.

Digital marketing companies are using blockchain technology. For instance, the Display Network channel is one of many examples. Bitcoin apps are changing the way people connect too. Social media marketing will get greater trust, transparency and better digital marketing practices all around.

Blockchain also helps in securing the company page on social media websites. Most of the people might not be a concern, but for those who care for their privacy, then the most viable option is to not join social networks at all. However, social networks still have their terms and policy for business networking, collaboration, and exchange of ideas.

Kickstarter and Indiegogo are the crowdfunding companies who help startups to successfully raise capital through tokensales or ICOs. A social network blockchain can let users easily raise money through crowdfunding. The same decentralized social network that runs the cryptocurrency can also support similar crowdsales without utilizing the external payment mechanisms.

Social media having a blockchain-enabled will have a dramatic influence on the latest popular platforms like Snapchat, Instagram, Facebook, Pinterest, and Twitter. Social media savvy marketers should be exploring the blockchain landscape to become early adopters of new social networking opportunities. As soon as the social media marketer will understand the potential of the blockchain-enabled social media network, soon the marketer can adapt the current business strategies to accommodate with the new reality.

How companies can make intelligent decisions and deal with risk in a better way?
Top Inventions in Medicine by Nobel Prize Winners
Comment