Home » The severity of the VUCA world on the corporates. What it demands from their leaders? 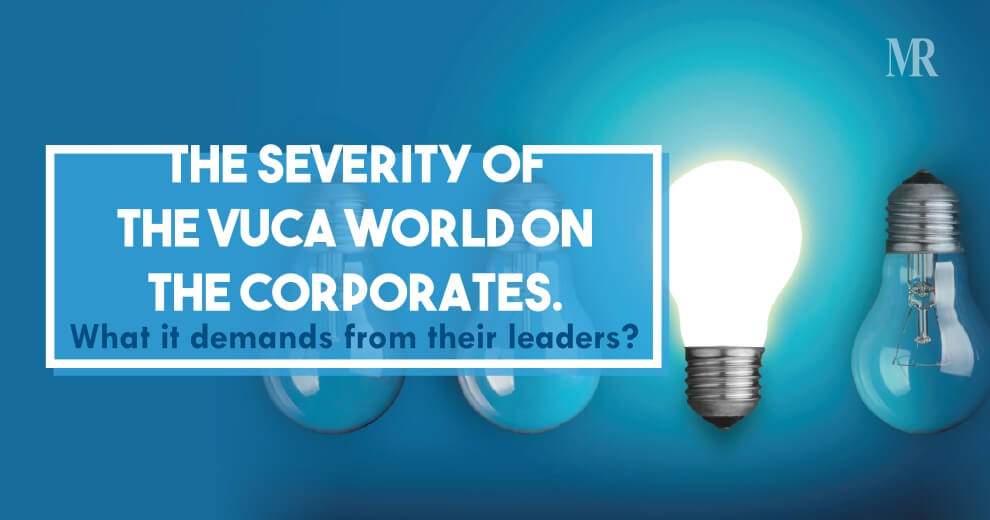 VUCA—the term first produced and implemented by The U.S. Army War College to train their officers in the response of collapse of the USSR in the early 1990s. VUCA describes the volatility, uncertainty, complexity, and ambiguity of the world after the Cold War. Therefore, it was specifically a lesson learned from the conditions arose due to the Cold War between the US and USSR.

VUCA, which was once a military training term has become trendy managerial acronym today. But what made corporates to follow this acronym? One of the reason is the Global Financial Crisis (GFC) of 2008—a once-in-a-century financial crash. Nearly a decade later we are still dealing with its fallout, and thinking of another, even larger, debt-caused crisis. Presently, VUCA is best acronym that encapsulates the impact of such thunderstorms which are just begun to unleash upon the globe.

Therefore, VUCA designates unpredictable events in the world, whether in case of a country like Afghanistan or the case of an organization like Nokia. Afghanistan was once known as a fast developing country with a healthy economy. Similarly, Nokia was a leader in phone manufacturing and was selling the most number of phones across the world. In both cases, these two elements have suffered a drastic fall from prosperity to a great depreciation in their value.

These downfalls are the recent examples of ineffectiveness in tackling rapid changes in defense and in technological world respectively. Thus, neither countries nor organizations and their leadership strategies are spared in the today’sfluctuating world. Just turning on 5 min news can show you the live volatility and uncertainty in the world. One can see the end of relative stability in the business, politics, or science which ultimately forcing humans to be more dynamic, aggressive, and prepared for upcoming disasters. This proves that the present world is unlike anything people have ever seen.

VUCA: Leaders and their strategies—Now and then

The leaders in every business, public administration, education, science, culture, entertainment etc. are dealing with VUCA atmosphere on a daily basis. They form various strategies according to their industry or locality. However, ill-prepared plans worsen the existing situation. Similarly, leaders who started instable times find it difficult to match with the present highly turbulent digital age.

This is because most of the old heroes are comfortable with a gradual changes and stick to industry boundaries. Rather than launching working on breakthrough advancements, they prefer analyzing rivals’ strategies and scaling end-products slightly more efficient than the previous ones. This standard planning system is radically affected by the current global market and most of the leading companies have failed to match the speed of the market. Remember Kodak? —the pioneer in cameras—now struggling with keeping its name in the industry.

The question is who are suitable for thriving in the VUCA world? And the answer is—there are too many elements that are beyond the control but those who are flexible as well as open to change and dare for new experience can hope for a success. This can be referred as acrobatic learning, investing continual efforts day and night to achieve anything more than competitors, moving forward to new ideas and preparing to fight in the tomorrow’s world.

About twenty years ago, no one would have believed that space rockets would be recycled, sent and received safely like an email. This unthinkable milestone is achieved by a private spaceflight company, SpaceX. One rocket with minimal mileage, moderate lift capacity, can used for delivery of goods to Earth-orbit, and 100% success rate in flying back to earth!

The evolutionary example of SpaceX clearly states the need of the present uncertain world. Leaders don’t need to work towards making detailed plans but testing various hypotheses about emerging technologies and quickly recognizing ways to get things accomplished. However, the higher leaders go—the more volatile uncertain, complex and ambiguous the job becomes and it challenges them to create their own way.

Dr. W. Burke, Thorndike Professor of Psychology at Teachers College, Columbia University, has been able to measure learning agility based on 4 years of initial research.He determined that people who are more learning agile demonstrate that agility in 9 different ways—Flexibility, Speed, Experimenting, Performance Risk Taking, Interpersonal Risk Taking, Collaborating, Information Gathering, Feedback Seeking, and Reflecting. According to the test consisting 38 questions, the research finds the learning agility in a leader. A leader with higher learning agility tends to have a successful future.

This is because agility comes from the motivation to think out of the box, try new things and learn with them. Additionally, probing deeply into views and asking counter questions on them can clear the clouds in a strategy and helps to focus on consistent application of effective decision making.

Old and successful companies had a humble beginning. However, they matched with the changing wave. The wave that demands more—different and useful or simple, reliable, and productive—anything, which very few can predict, very few can dream of—but one can strive towards becoming those very few people with disruptive strategies.

Initially, walked as an online bookseller to a flying retailer of nearly every product, Amazon has recently achieved a trillion dollar valuation with its disruptive strategies. Similarly, the leading payment service provider, MasterCard jumped to a different path than its rivals. It approached remote countries which were ignored by other payment giants. MasterCard found out the need for mobile payment options and excelled in that arena with solutions, bringing easy-to-use mobile payment features.

In the case of startups, most of them are born out of an idea which identifies a need that other, more established organizations have ignored. But to consume work ahead with the VUCA change, startup leaders must produce game-changing, innovative products and services that can fundamentally change the way people live or work. This is helpful in making a distinct and unique business that can beat its competition with its end products.

In conclusion, VUCA environment calls for different kinds of leaders who are highly focused on existing solutions or the ones with the ability to turn vision into reality, catching the fast pace tech realm. One can say VUCA typically require a fusion form of leaders and machines who can work continually, creating innovative offerings and streamline business process to keep running with the change. Similarly, to fortify the efforts, a brief understanding of VUCA can always give a reminder of the external environment to change the game with ground-breaking products, strategies, models, and self-built capabilities.