Home » Peter Alexanderson: A Cybersecurity Leader With Feathers Of Experience In His Cap
The 10 Most Prominent Personalities in the Security Industry, 2018

Cybersecurity is not new, but it is definitely a red-hot area when it comes to protecting mobile devices. The ransomware epidemic and sensational rise in cybercrime have in recent years leapfrogged from PCs and laptops to smartphones and other mobile devices affecting companies and consumers resulting in catastrophic losses globally.

There is an increasing demand for secure mobile transaction solutions across all industries worldwide, which is, according to most analysts, expected to drive massive market growth in the coming years. One well-known example is Bank of America that has claimed that they have an unlimited budget when it comes to fighting cyber attackers, fraud, and hackers. Every year, banks and other financial players are spending enormous amounts of money to stop fraud. In addition, every year, their losses multiply. This is why the solution to combat cybercrime, especially for mobile devices, has to be more holistic than just installing security software on a server. This is the reason Peter founded Covr.

A serial entrepreneur with a vision

Peter Alexanderson, the CEO and founder of Covr Security, is a cyber-security veteran and a familiar, very respected entrepreneurial profile in the Swedish IT-industry since 25 years. BankProof was an advanced financial service of which Peter was a catalyst back in 2002. He also founded another company that focused on security and vulnerability testing for websites. Being a true serial entrepreneur, he also ran a graphics company with a pre-press machine that was way ahead of its time and distributed it worldwide.

Before long he had the vision to take security to another level – seing that mobile was the platform of the future. Alexanderson met Patrik Malberg, another brilliant entrepreneur and they were both instrumental to the birth of BankID, the Swedish national standard for online authentication with a 95% adoption rate and 7.5 million users. Having done this journey, Peter Alexanderson has proven his know-how of how to lead and run a fast growing startup in a burning hot industry. Later he wanted to go even further, realizing that the global market needed a similar solution – subsequently he founded Covr.

He knew that user-centricity is the key, which led him to some unique security features – one of them being that the end users are notified in real-time when an unauthorized person attempts to log in and use their email, credit card or online bank. The user can identify and stop unauthorized, suspicious activity immediately by tapping Yes or No.

Peter himself says his role in the company is to be the internal company cultural influencer and he trusts that his colleagues excel in what they do.

“Although our primary focus up until now has been online banking Covr suits any industry that needs bullet-proof security between their users and themselves, for example, third-party payment services, online retail, betting, casinos, or digital home security solutions among others.” Peter believes.

One important stepping stone for CovrSecurity was the admission into the Innohub project in Bangkok last year. Innohub is Thailand’s first ever, international fintech accelerator program – a partnership between Bangkok Bank and Nest. During the three-month program Covr were able to leverage the accelerator program resources and utilize Thailand as a test market. The result of the program is the installation of a POC login and authentication application with Bangkok Bank, which soon will be realized in a pilot.

To make sure a user is the one he says, he is, a second device like a phone is needed. There are many new ways of trying to find out who the person is, an example is AI and that can come close to the true fact but not all the way. To achieve that, one needs to wait for the information to reach the end of service and then ask the user if it’s him that wants to log in. For an instance, you want to send money to a person, when you press enter; you normally don’t know what lands on the bank regardless of where you got the password from. Also by connecting the credit/debit card to Covr service, makes the user, solitaire in decisions of withdrawal or purchase something. It doesn’t matter if someone else has your credentials if you don’t reply in a certain time, then it will be denied.

What’s also added in, except for authentication is a secure channel to end-user, which can be used from the bank like if the stocks are going down does the customer want to change to A, B or C? or send pure information.

Peter trusts that the Asian market is more than ready for the adoption of new technologies because several legacy layers and problems can be skipped. He also intends to introduce Covr in the South-East Asia region with the ambition to have verified customers and partners.

Covr Security is currently located in Malmö, Gothenburg, Stockholm, and Palo Alto and consists of a close-knit team with a dynamic mix of forward-thinking individuals, all devoted to make the internet, a safer place. The team believes in commitment, agility, and creative thinking mindsets that are necessary to thrive in a fast-paced environment built on true entrepreneurial spirit.

Peter believes in the simplification of the processes involving day to day banking tasks. Therefore, he ensures that Covr has a new release every quarter and each one is adapted to the latest customer and security demands. The latest release, for example, simplifies Customer sign up process and ease of use of the app through adding QR codes for both on-boarding and authorizing transactions. Also, he has a plan to expand in Europe and Asia by the end of 2018. Peter envisions a future where Covr will fortify its pole-position within internet security, and become one of the top players in the market by providing users with better online experience and security. 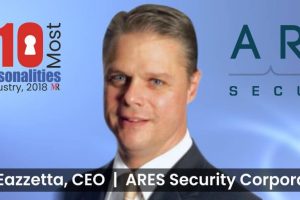