LlamaZOO Interactive’s mission is to be the world’s number one spatial data and digital twinning solution for the natural resource sector. They are focused on helping different businesses in industries including mining, oil and gas, forestry and agriculture to quickly implement innovation and take advantage of the disruptive benefits of AR/VR and the Industrial Internet of Things (IIoT) while reducing risk.

“It’s only been in the last year or two that industry has paid attention to Augmented Reality / Virtual Reality (AR/VR) technology as more than a curiosity or a passing fad,” says Charles Lavigne, Co-founder and CEO (Chief Llama) of LlamaZOO Interactive. “However, a few visionaries in traditional industries such as mining, oil and gas and forestry are poised to take advantage of being a ‘first-mover’ by incorporating disruptive technologies such as AR/VR to reduce costs and potential risks while staying ahead of competitors.”

In 2018, LlamaZOO won recognition from the resource industry for its MineLife VR software solution. MineLife VR pulls together mapping data from a variety of sources to create a life-size 3D representation of a mine plan from start (exploration) to finish (eventual closure and environmental remediation) to improve the process of consultation. MineLife VR, LlamaZOO’s practical AR/VR solution for industry helps improve mining project planning by improving community consultation and reducing the risks of miscommunication and costly delays.

“Resource companies typically struggle to share information both internally and externally. Data has to somehow be extracted from numerous non-interoperable databases and legacy software packages across different organizational silos,” says Lavigne. “For mining companies, for example, it’s been especially difficult to present information about a planned mine or other project to non-technical stakeholders such as people in the host community – until now the host communities have never had access to the highly specialized software needed to view all mine planning data.”

Thanks to company DNA that includes developing data-intensive video games with a focus on visually appealing UIs, LlamaZOO has found a way to pull and centralize this large amount of data into a VR solution that can be accessed by anyone with an Internet connection.

Until now it’s been difficult for mining companies to show stakeholders such as local communities that rely on the land for food, recreation and connection to their traditional culture what a planned mine might look like, and how it will impact the surrounding geography. As a result, this lack of information can make it harder for mining companies to obtain the social license needed to move ahead with a planned project, introducing the risk of project delays.

Walking Through a 3D Map of a Planned Project

Using AR/VR solutions developed by LlamaZOO Interactive, government, community and other stakeholders can “walk” through a mine plan as a 3D map. LlamaZOO’s solution is more than a 3D map: MineLife VR includes detailed information such as local flora and fauna collected by professional foresters, biologists and ecologists. Using LlamaZOO’s VR solution, stakeholders can explore a planned mine or project to see how the surrounding landscape will be affected and can be reassured that their concerns will be implemented into the planning process.

MineLife VR also fast-forwards decades into the future to the end of the project and the how remediation minimize the long-term impact of the mine. This improved consultation helps reduce the risk of project delays.

LlamaZOO’s MineLife VR solution also makes stakeholder consultation safer and more inclusive, while reducing costs. By using LlamaZOO’s MineLife VR, anyone, anywhere, with an Internet connection can visit the proposed mine site. This means stakeholders no longer must be flown to remote mine sites, eliminating safety risks, travel logistics, and greenhouse gas (GHG) emissions while potentially speeding up the approval process and reducing overall costs.

“One of LlamaZOO’s core competencies is centralising disparate mapping datasets to create interactive 3D AR/VR maps and other experiences,” says Lavigne. “By relying on our software engineering expertise to centralize this massive amount of data, LlamaZOO can build practical and engaging VR experiences that can be accessed anywhere in the world, wherever there is an Internet connection. Kind of like how most people play video games and consume media today.” 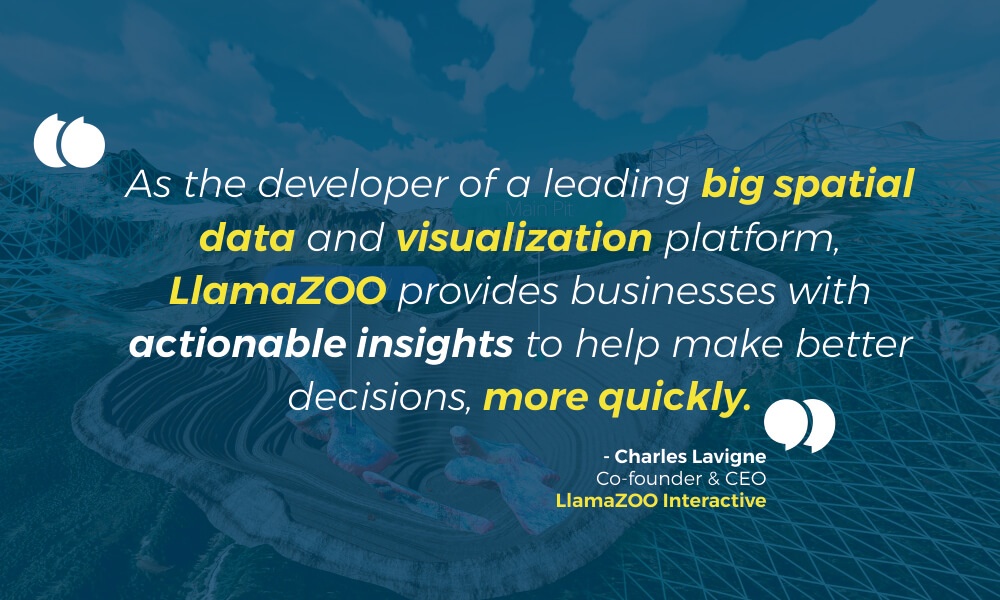 LlamaZOO, based on an island about forty minutes by seaplane north of Seattle, is a virtual and augmented reality studio that combines the creativity of a video game developer with the expertise in heavy-duty software engineering needed manage the massive data generated by AR/VR applications in mining, oil and gas, agriculture and other industries.

Charles Lavigne is co-founder and CEO (Chief Llama) of LlamaZOO Interactive and is an experienced game and mobile app designer and developer with over 12 years of experience working at some of the world’s largest gaming companies. Lavigne has extensive experience in leading teams through concept development to live operations, and brings a diverse skill set to the table.

“LlamaZOO’s mission is to be the world’s number one spatial data and digital twinning solution for the natural resource sector,” says Lavigne. “We’re focused on helping different businesses in industries including mining, oil and gas, forestry and agriculture to move quickly to implement innovation and take advantage of the disruptive benefits of the Industrial Internet of Things (IIoT) while reducing risk.”

At LlamaZOO, Charles and his expert team members develop interactive AR/VR/MR solutions that enhance user’s experience through communication, collaboration, and education. As the Director of LlamaZOO’s products and services, Charles works with the LlamaZOO team to develop enriching 3D visualization experiences.

Mining, oil and gas, forestry and other extractive industries need to communicate and plan around data that is traditionally isolated across non-interoperable software, and various organizational silos. Charles and his team specialize in centralizing complex spatial data to provide accessible and actionable meaning to clients.

When asked about his personal advice for young entrepreneurs, Charles says, “Be ready to put in a lot of long hours, be tenacious, and speak to your customers. It’s important to hold your ground while pioneering a new path.” 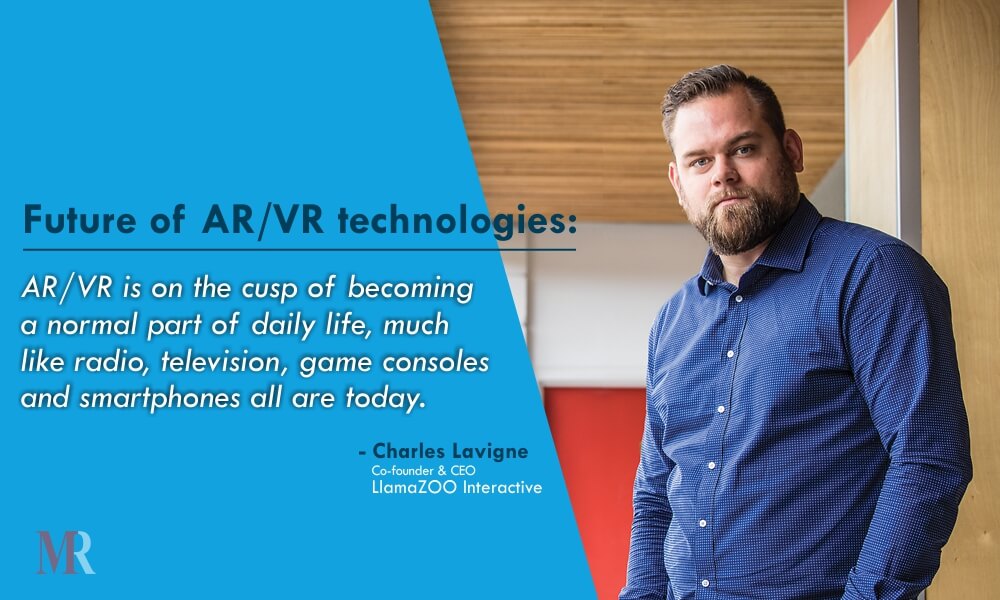 By integrating GPS and sensor reporting into MineLife VR, management can be given a 3D dashboard of where operators and machinery are located at any given time, as well as any other meaningful data represented on a per unit basis. This provides complete visibility at any time, unlocking just-in-time adjustments based on changing conditions. 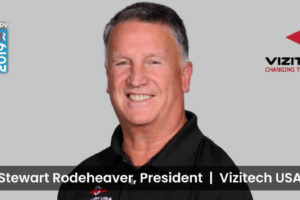 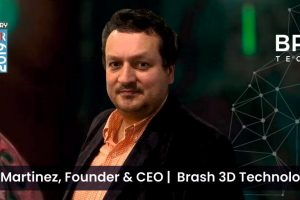 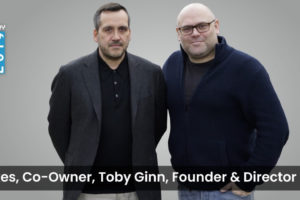