Home » Jorge Cortell: Pioneering Entrepreneur Behind Kanteron Systems
The 30 Most Creative CEOs of 2018

When Founder & CEO of Kanteron Systems, Jorge Cortell met a breast cancer patient in New York, he decided to risk his company and livelihood to help her. However, he first-hand witnessed the disconnected nature of cancer-care processes, involving data and medical imaging sharing. Jorge then focused all his company’s resources to overcome the technical challenges that prevent medical multidisciplinary teams to efficiently share information through an advanced software platform. Ultimately, his hard work and perseverance paid off for assisting her in recovery as well as pioneering an innovative product for his company.

Going back to his foundational years, Jorge started off his career as a professional basketball player. However, physical injuries ended his career in the third game of his first pre-season. Even though founding and leading a healthcare solutions provider company was not his initial choice, Jorge never gave up. He rose to the occasion by establishing back-to-back four companies. Kanteron Systems came into existence in 2005 from the financial resources that he conserved after selling his previous ventures.

Kanteron Systems: Bringing Precision Medicine to the Point of Care

Headquartered in Valencia, Spain, Kanteron Systems offers the first commercially available precision medicine workflow platform in the world. The point-of-care solutions provider company facilitates the integration of medical imaging and clinical genomics for healthcare practitioners worldwide. Till date, Kanteron Systems’ solutions have already been deployed over 500 times in 12 countries; at some of the world’s largest healthcare networks. As the Founder & CEO of the company, Jorge plays a hand-on role in delegating people at appropriate positions as per their area of expertise, allowing him to focus on Kanteron Systems future strategies.

Diving into the contemporary, technical world is definitely not a walk in the park. Pitfalls and challenges came to Jorge while establishing Kanteron Systems in the form of lack of easy adoption of technology as well as inadequate resources. There were countless occasions when Jorge was discouraged by his fraternity. Sharing his experience about those instances, Jorge asserts, “I can’t even count the number of times I’ve been told, ‘that’s impossible’, or ‘you’re crazy’, or ‘that’s too much’, or ‘you’re aiming too high’. Every time I heard those words, I got more motivated. Times when I saw a multinational medical device company abuse its dominant position to rip off a hospital and its patients, I became more determined and focused to make a change in the healthcare scenario.” 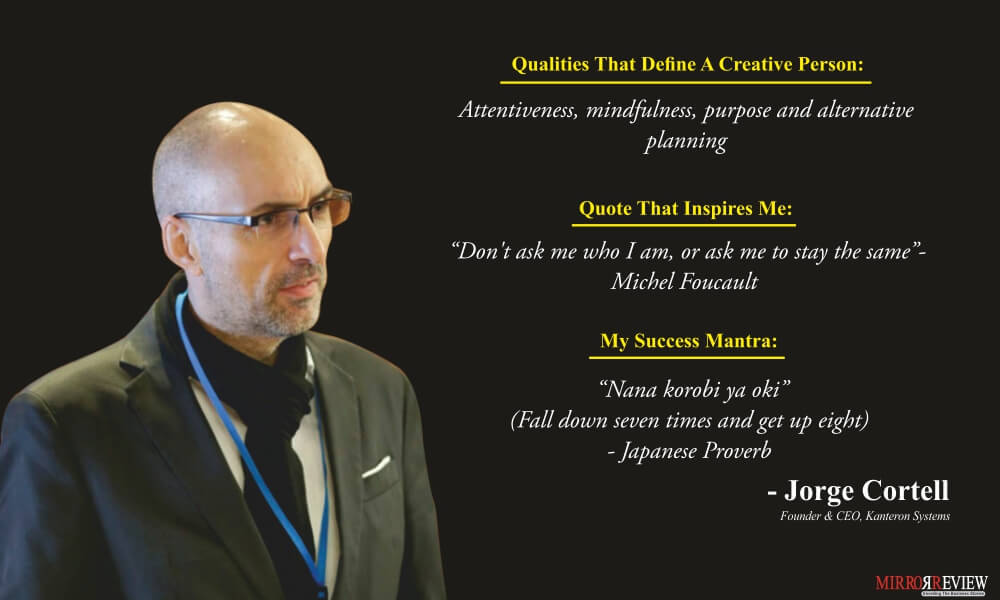 Standing Out from the Crowd of Competitors

Besides being the typical healthcare technology experts, the team of Kanteron Systems comprises of a diverse group of employees such as robotic vision experts, gamers, hackers, etc. thereby giving the company immense flexibility in terms of skills and services. Also, Kanteron Systems solutions are based on open source since Jorge as well as his team does not believe in tying the customers down, or creating artificial barriers. The healthcare solutions provider company invests time to improve their solutions constantly, at a furious pace. Jorge does not mind in taking the road less traveled or committing mistakes as long as he is learning along the way.

Following the Path of Unconventional Faiths and Beliefs

One of the most important lessons that Jorge learned while building his company was to never believe the hype as well as not to fall for the shiny message. The world knows about several entrepreneurs and startups who had a backstory that made them famous. Quite often powerful contacts, aristocratic background, and other types of privilege play a crucial role in driving them towards stardom. Jorge himself belongs to a high society where he had family money, attended elite universities, etc. However, he risked absolutely everything he had to pursue his vision and help others. Known to call a spade a spade, the CEO & Founder of Kanteron Systems beliefs are rather uncommon. From a scientific-agnostic approach to spirituality to a cooperative-anarchist approach to organization and socioeconomic equality, Jorge’s views are drawn from classic philosophies that predate contemporary ones by thousands of years.

Roots of Creativity & its Correlation to Age

According to the CEO & Founder of Kanteron Systems, creativity is more about connecting the dots where an individual recognizes a great idea, learns something new about it, considers unrelated concepts and then bridges the missing gaps. Ideas are basically anchored on previous concepts. It entirely depends upon individuals on how they look at them and on top of that where and when to apply them. Eventually, vision and application of ideas determine a true genius.

Sharing his thoughts on the existence of a creativity gap between generations, Jorge feels that all ages come with a set of advantages and disadvantages. On one side, younger generations enjoy excess energy, allowing them to create, try, test, make mistakes, and move fast. While, older generations on the other side, enjoy the privilege of having both resources as well as vast experience. Also, the evolving technology is on the side of the younger generations. Older and younger generations should instead come together and learn from each other to elevate their personal creativity. Additionally, Jorge presumes that it is a good idea to have as much diversity as possible in every team and project, multiplying the company’s growth and progress.