Home » Learn How LiDAR is Changing the World for Better 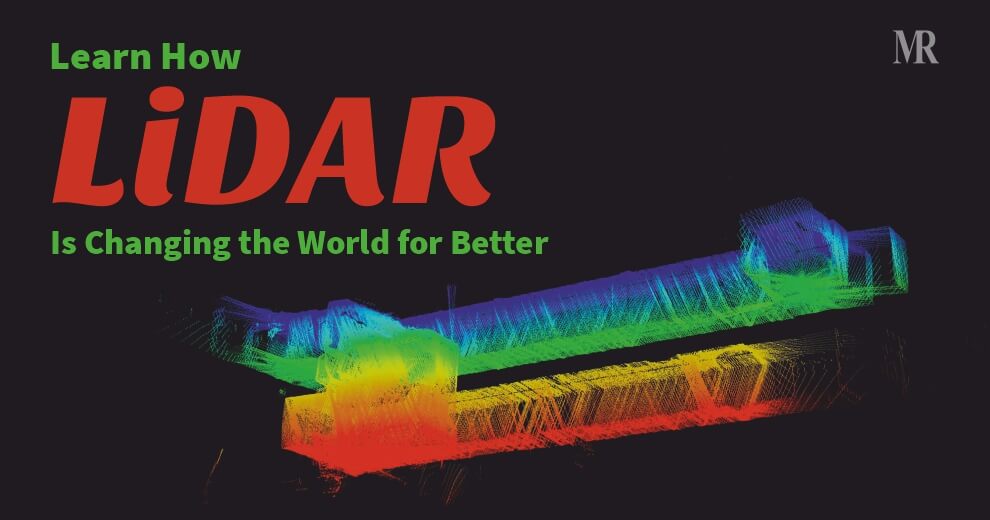 Human beings are peculiar creatures who want to know anything and everything. In order to do this, we have developed many technologies and devices so that we can search and gather about the unknown. LiDAR stands for Light Detection and Ranging, is a remote sensing method that measures the distance to a target by illuminating the target with pulsed laser light and measuring the reflected pulses with a sensor. LiDAR is one of those technologies, which helped scientists and researchers to characterize vegetation and other objects across large sections. To map objects, LiDAR uses ultraviolet, visible, or near-infrared light. This remote sensing method is used to make geological maps, create virtual models of city landscapes, scan the ocean floor at some shallower depths, and map changes happening in coastlines.

LiDAR works in a similar manner as radar and sonar works, but it uses light waves from a laser. Generally, a LiDAR device consists of a laser, a scanner, and a specialized GPS receiver. From the LiDAR system, light is emitted from a rapidly firing laser. The sensor on the system calculates the total time taken for each pulse to bounce back. Since the light moves at a constant speed the LiDAR device can calculate the distance between itself and the target. The GPS is used for identifying the X, Y, Z location of the light energy. By repeating the same process, it forms a map of the surface it is measuring and the 3D model of the surface can be constructed. LiDAR is becoming popular and used in various sectors that are:

With the invention of autonomous cars, the automotive industry has transformed into a completely new level. Many organizations started financing as well as building self-driving cars. An autonomous vehicle uses LiDAR technology to look at its surrounding area. The remote sensing technology measures the distances, categorizes obstacles ahead, brightens objects with a laser and then creates high-resolution digital images of the surrounding areas of self-driving cars. By mounting a LiDAR on the bumper or the roof of a car, it can calculate the distance between two vehicles to avoid the collision. The LiDAR technology also provides information to the Adaptive Cruise Control system of the self-driving to decide when to apply the brakes, slow down, or accelerate the vehicle.

Augmented Reality (AR) might not be the same as virtual reality, but the technology is proving itself as a very useful tool in our everyday lives. The AR is rapidly growing in popularity because it incorporates the elements of the virtual world into the real world that enhances the things we see, hear, and feel. AR merged with LiDAR can heighten the transparency and final output of AR systems. In principle, a LiDAR scanner offers the ultra-detailed 3D mapping which allows another AR system to pile his data on top of a precise and reliable map. The point cloud created by LiDAR scanner can offer an extraordinary AR experience. Currently, there is research going on the application of Doppler wind LiDAR, which would allow us to see the clear movement of the wind. The research would be useful in aviation safety, data visualize of atmospheric, weather forecasting and disaster management.

The most common use of LiDAR technology is to survey the landscapes. With the recent advancement in hardware and software sector, the analysis of LiDAR data can be processed more efficiently. The remote sensing technology can enter in thick shades, which allows the scientists to uncovered earth territory models that was not visible to them by picture based photogrammetry. A comprehensive and updateable risk model can be introduced allowing risk to be managed, rather than responded to.

Biodiversity for Species and Insects

Forest is home of different species and insects. To unveil the mystery of their lifestyle LiDAR technology is used. Using LiDAR, scientist and researchers gather data about various species and insects. Then, the gathered data is analyzed to see whether the forest is a suitable place for them to live or not. Essentially, the vertical arrangement of trees, shrubs, and other plant tell what species can live and prosper in that area.

We all had known about tsunami and its effect on human lives. The natural disaster can destroy infrastructure and take a thousand lives. However, LiDAR technology can help to minimize this damage. Scientists can utilize LiDAR technology to understand the area that will be covered when the tsunami happens. The 3D CG representation of a terrain’s surface produced by LiDAR gives the elevation value of the seashores and bathymetric data provides underwater elevation. The data layered in the GIS gives us the flood area details when a tsunami occurs.

As the LiDAR technology becomes cheaper and more available, no doubt people around the world will continue to enjoy fascinating new applications built from it. LiDAR technology gives an opportunity to do impossible tasks out of human capabilities like surveying the remote landscapes. The technology has a versatile nature for utilizing its sensors in various situations. Moreover, LiDAR technology can change the viewpoints of the human for monitoring an object or anything. This technology has the potential to transform human insights on various things and in future, we might see things from a different perceptive.

Machine & Structural Fatigue: The Company Killer
Performance as a service