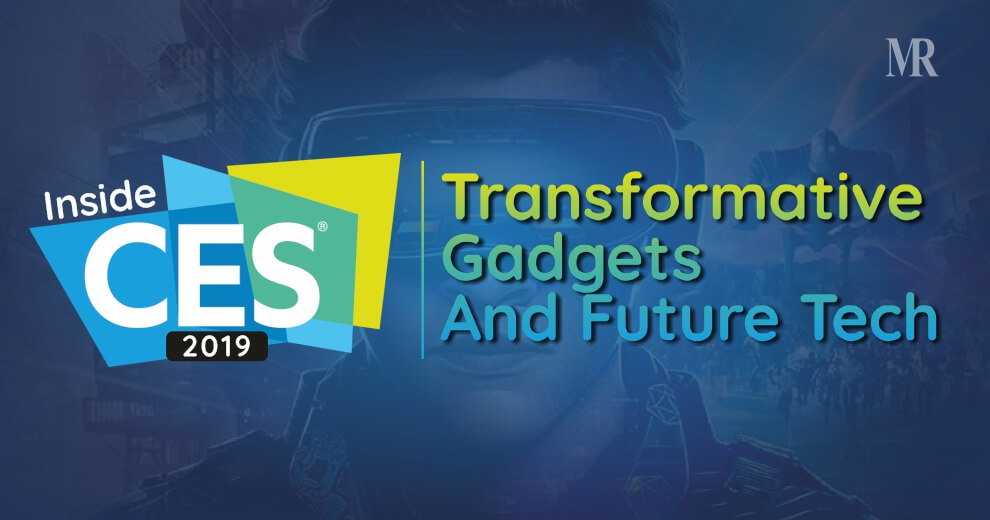 Staged by Consumer Technology Association (CTA), Consumer Electronics Show (CES) has been showcasing the consumer technology innovations each year since 1967. Having announced thousands of the products at the yearly show, it has become the largest and most influential technology event on the planet over the years. Like every year, CES 2019 has also been a platform for presenting the latest developments and next-generation innovations in many areas of technology. Around 180,000 attendees have witnessed the future showcased by more than 4,500 exhibitors in the 4-days event.

The CES 2019 covered all the revolutions in several areas including computers, health, and transportation, etc.

Computers proved that Small is the New Big

Lifting the bag of overwhelming features, tech giants have shown up with some amazing advancements in the features and experiences of using portable systems.

At the event, Dell presented XPS 13 (2019) with the biggest change—the repositioned webcam on the top bezel. Moreover, the latest version has also upgraded the machine with faster Intel 8th-gen chips.

It is undoubtedly one of the most powerful gaming laptops announced at CES 2019. Compared to the regular Blade 15, the Advanced Edition has a few remarkable upgrades including NVIDIA’s extremely powerful RTX 2060, 2070, or 2080 discrete graphics, support for up to 64GB of storage, enhanced speakers, and has a webcam that works with Windows Hello sign-in support. With this clamshell, Razer has broken all the grounds. Moreover, the American giant also introduced attendees with its HyperSense concept, where gamers can actually feel every shot, jump, and explosion while playing.

Along with all the major players in computers, Huawei also came up with an unexpected portable machine with features like a touchscreen and discrete NVIDIA GeForce MX150 graphics, stereo Dolby Almost speakers, and fingerprint reader.

Wearables Went to the Next Level

In addition to Apple watches, Withings also came up at CES with its Move ECG. The analog smartwatch offers ECG readout to help users keep better tabs on their heart health. Moreover, its price is quite on a lesser side when compared to that of Apple’s.

Facebook-owned Oculus showed up its VR headset, the Quest. The gadget promises an unmatched experience, as it comes with no limits of a gaming PC and wires, along with a sleek design and hand-tracking controller technology making it user-friendly.

HTC presented the Vive Pro Eye, an improved VR headset that is it’s first to come with built-in eye-tracking allowing users to navigate menus just by looking at them instead of using motion-based hand wand controllers.

At CES 2019, many tech companies have presented an 8K TV of some sort, such as Samsung has come up with a 75-inch Micro LED 4K TV with modular display technology. The modular nature enables the flexibility in screen size, and hence the TV can be positioned across various sizes, resolutions, and aspect ratios as per user’s space.

The LG Signature Series OLED TV R is undoubtedly a highlighting innovation from the event. The 65-inch TV, with just 3mm thick display, rolls up into its aluminum base when not in use.

Valeo, a French global automotive supplier made a test track demonstration of its solution Voyage that enables a person to virtually enter into a vehicle. This concept lets the driver talk and see a passenger who’s actually remote and has connected through a VR headset. Basically, with a headset put on, the remote passenger is teleported into the car. With this innovation, Valeo has initiated a revolutionary experience.

B-Secur’s steering wheel dubbed as HeartKey, takes measurements from a user’s heart and with the unique heartbeat, it enables features like unlocking and starting the car. With added biometric technology, the wheel can detect potentially dangerous changes in the user’s heart rate & rhythm, stress levels, fatigue, respiration, and atrial fibrillation. With such capabilities, HeartKey can be used not only for wellness and fitness tracking but also for continuous, passive user authentication.

One of the biggest announcements of CES 2019 was of Intel’s upcoming Ice Lake CPUs. The revolutionary 10nm processors indicate an opportunity for laptop manufacturers to create more powerful and compact devices in the future.

EnergySquare’s charging tech was also one of those unexpected presentations at the event. The French startup introduced a universal wireless charger for multiple devices. The solution allows making a charger out of any surface, allowing getting rid of cables. Placing any device such as mobile, laptop, headphones, power bank, etc. upon it users can leverage a faster charging experience.

A novel offering by Ledger, Nano X is an upgraded version of Nano S cryptocurrency wallet. The Ledger Nano X is a Bluetooth enabled secure device that stores user’s private keys and assures the safety of crypto assets while managing them on the go.

The 1TB of storage in a stamp-sized SD card is clearly the behemoth of storage capacity. The Lexar offering advantages Class 10 UHS-I (U3, V30) technology for a read transfer speed up to 95MB/s.  The card is a wish come true for binge shooters, where they can shoot much of 4K video and can plan to shoot even higher 8K resolution video in the future with facing the hassles of changing storage cards oftentimes.

Having seen the most futuristic innovations at CES 2019, the upcoming yearly event will certainly bring a mouthful of novel elements in front of the world. This year, the 8K displays with customizations, compact computers with revolutionary features stood out in the CES. Therefore, the next exhibition could be about detailed advancements in these fields. Moreover, as a next step to the presented concepts at the tech event, being able to experience them in reality is the most awaited factor.