Home » Learn How Robots In Logistics Are Reshaping The Industry 4.0 Revolution 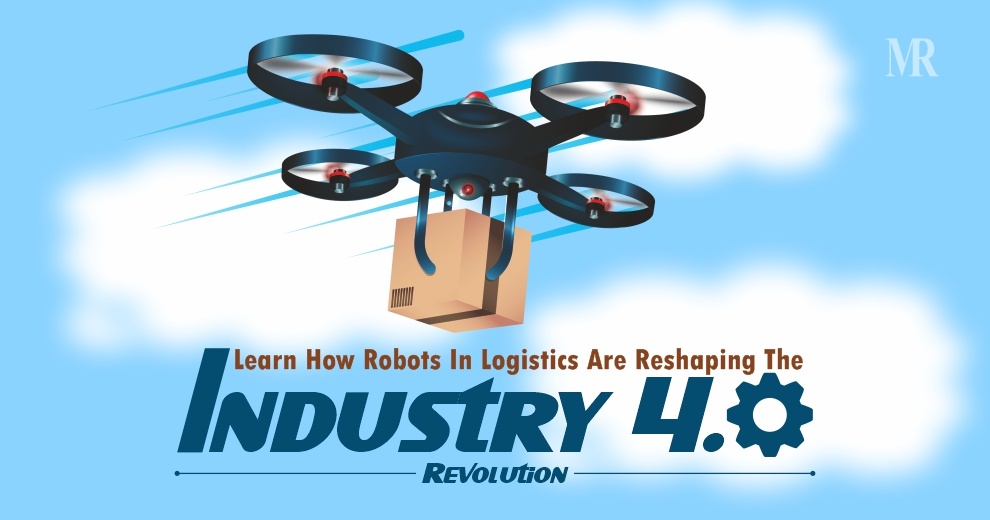 Years back, Amazon’s logistics robots, Kiva Systems were in high demand mainly from retailers and e-commerce until the company put acquisition over the use of Kiva Systems, now known as Amazon Robotics, for its own operations alone. After then, the market of cobots (assisting robots) picked up pace and started growing. In the boardroom of logistic companies, there always has been a common question to discuss: how can we deliver things faster and more efficiently without compromising on the quality of service?

Now they have found the answer; take the help of smart machines that not only can save the time but also assist and manage loads of diverse tasks.

Future evolution concerning robotics in logistics industry is deeper than one can think. From first industrial revolution comprising of mechanization through water and steam power for mass production to assembly lines using electricity in the second, the fourth industrial revolution is supposed to inherit what started in the third i.e. adopting computers and automation and enhancing it with smart machine learning.

Are we industry 4.0 ready, believing robots and cobots at the same time?

While the term industry 4.0 is considered as a marketing hype, certain shifts happening in the manufacturing sector deserves our attention. Several graphs represent the development of technology from first industrial revolution to the third suggesting humans have evolved 100 times more than the previous ones. For example, most steam engines used in the 19th century were replaced by the electric trains in the 20th century, making transportation easier and faster, cost friendly, and efficient enough for multiple industries. Also, when computer was introduced in industry 3.0, the continuous contribution of technology made it more concise, quicker, and easier to learn. Today, more than 3 billion people are using internet every day on their PCs, mobile phones, tablets, or IoT.

First, create the controller like a human brain so that robots can become adaptive, fast, highly flexible, and intelligent. Second, simulate the human eyes by developing a vision system that is adaptive to colour and light, works fast, and is free to move. Furthermore, the vision system must position each product so that it can lie in an arbitrary position in the tray and exact product position is communicated to the robot for grasping. Third, create the human hands to really feel the task and work collaboratively in a safe way.

Presently, it seems like the whole can’t stop gushing about the industrial 4.0 revolution which is fast jetting with rapid technology breakthroughs such as IoT, robots, Artificial Intelligence, and 3D printing.

So, how fast robotic technology is developing today?

According to Tractica, the global warehousing and logistics robots market will make $21.7 billion by 2021. But where will robots in logistics boom in the future?

However, industry 4.0 is considered as a buzz created around industries. There is a fact that targeting robots in logistics can propel the company towards powerful and phenomenal success. Therefore, robotized production will become more affordable, more flexible to different product types, and with high use of capital as the systems are reprogrammable. Now companies can aim to deliver an easy to program, easy to reuse, reliable, and safe robotized platform to accelerate innovation. This is how robots in logistics are reshaping the industry 4.0 revolution.