Home » QA Mentor: Pioneering the QA & Testing Space with a Unique and Innovative Approach
The 10 Most Advanced QA & Testing Companies of 2019

With the digital changeover, the demand for quicker turnaround time on Quality Assurance (QA) has greatly increased. Hence, it is a crucial time for a QA and testing service provider to be able to deliver and complete testing much quicker. Moreover, the rapidly increasing user base of mobile devices, browsers, and operating systems, is also one of the major reasons behind the need for faster turnaround time on QA. As a result, today, many organizations are offering on-demand services including compatibility testing, cross browser testing, mobile testing, as well as performance and security testing services. These services are the most integral part of any sort of digital media or various web-based platforms and applications.

In order to support the digital transformation, New York-headquartered QA Mentor, Inc. provides on-demand services, which allow its customers to experience a quick turnaround time on test design and test cases execution in a matter of just a few days. Moving forward with the pace of the technological revolution, the 2010 incepted firm has also been recognized with multifarious awards as a result of its deep commitment towards clients, employees, and supporters around the globe. One of its biggest achievements is winning the prestigious “Leading Vendor Award” at the “European Software Testing Awards 2017.” Moreover, QA Mentor has also been appraised by CMMI Level 3, which is an indicator of its disciplined processes.

Having a team that works with an innovative approach, QA Mentor has never failed to match with the latest tech trends in the market. As a part of its continuous innovation, the firm has designed and developed a product called “QAMometor” that it is going to release in the second quarter of 2019. This solution is all about metrics and KPIs that help measure different productivity targets and maintain quality throughout the software development lifecycle. Moreover, this platform will include over 50 different metrics and KPIs for several different departments.

In addition, QA Mentor is planning to come up with a service focusing on providing the localization testing used to conduct testing on different language translations, as most of the applications are getting translated into different languages. As an advantage of this move, QA Mentor will have the localization testing available on demand for various languages all around the world. It will utilize its crowdsourcing community to test from 123 countries in the world. Further, it would also be able to translate and verify translation of any of the applications to those languages and as a result, its customers and clients will have much more opportunities from QA Mentor in terms of a wider and more global testing coverage. Moreover, in the next 24 months, the achiever team of CMMI Level 3, targets to achieve the Level 5 appraisal.

QA Mentor is presently serving 382 clients from Fortune 500 to various startups in 28 countries. To empower startup organizations, the company is planning to launch a package service. Considering startups’ limited budgets, the projected package will be a comprehensive and extremely economical solution for QA. Moreover, as organizations need to invest a lot in buying licenses for test management solutions, QA Mentor promises to provide its test management tool—QA Coverage free of charge to all of the startups utilizing its services. Along with that, the customer-oriented entity will also provide startups with open source solutions in automation performance testing and security testing, which does not require them to spend any money on licenses.

Ruslan Desyatnikov, the Founder, President, and CEO of QA Mentor, is an industry veteran who has over 20 years of experience in Quality Assurance, Quality Control, Process Improvement, and Software Testing. According to Ruslan, the proudest achievement of his career was at HSBC Bank when he was managing 150 member’s testing team distributed in around 12 different countries. Back then, it was also the most challenging for Ruslan as he successfully supported over 120 different applications in different time zones, cultures, and countries.

Asked to describe himself, he competent leader said that the three traits that come to mind are fearful, motivational, and disciplined, which also describe his leadership style. At QA Mentor, Ruslan motivates his team with supportive compliments and constantly challenges them to grow to improve their career. Similarly, he never hesitates in providing constructive criticism when something goes wrong as he is a highly disciplined person and expects the same from everyone. Ruslan asserts, “I like to follow our established approaches and I don’t like to compromise quality.”

The Belief in “No Rest for the Best”

The team at QA Mentor doesn’t believe in the possibility of knowing it all, therefore they never stop learning. Moreover, each member of the team is committed to keeping up with cutting-edge technologies and process methodologies, which get them ahead of the game. At the current stage, QA Mentor is testing disruptive technologies such as artificial intelligence & machine learning and supporting a number of clients with the platforms based on them. Apart from that, Internet of Things (IoT) and Big Data are also the areas where the ever-upgrading firm is using its tools. Further, QA Mentor looks ahead to provide the blockchain testing services, for which it already has several customers around.

When asked about what is the inspiration behind his great work, the motivational personality, Ruslan uttered, “Inspiration has always been there for people who love what they do.” As he had entered in the testing field and started testing as a junior tester, he went through all different stages wearing various hats. While expressing his love towards the field of testing, he said, “Since the start of my career, when I used to work for other companies, there was not a single day when I didn’t want to go to work.” Ruslan also has a lot of interesting ideas, which he has not yet materialized and that still motivates him to complete the work ahead. In addition, seeing satisfied clients is also a great source of motivation for Ruslan and his team.

While discussing the QA Mentor team’s mantra to success, “We never stop at our accomplishments or our awards, we don’t look back. We only look forward,” the CEO says. 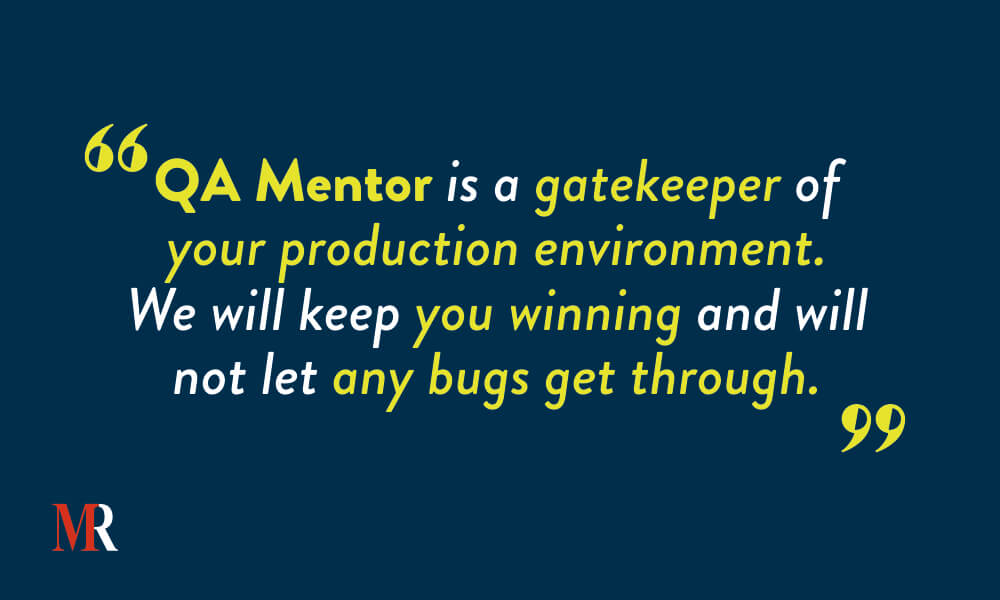 For QA Mentor, the biggest challenges today are associated with the growth. Expanding year after year at the average rate of 35%, in the present year, Ruslan is anticipating a much higher growth seeing the enhancing demands from the existing clients. In order to serve the growing demands of clients, QA Mentor is hiring talents to strengthen its workforce. Similarly, to conduct the post-hiring processes smoothly, it has worked on an onboarding testing program for new joiners, which also helps them to understand the company’s methodologies, best practices, tools, and internal processes. For that reason QA Mentor has built an e-learning training system for all the new hires, to train them in a much quicker way and get them ready to support and adapt QA Mentor methodologies and best practices.

Words of Experience for Wantrepreneurs

While considering what he could have done better in the case of QA Mentor, Ruslan suggests two major things to all the want-to-be entrepreneurs. First is to start it as soon as possible. As Ruslan took much time to establish QA Mentor with an intention to be pro in the field and then start his own endeavor, he recommends starting a business much sooner. The second thing he advises is to make the proper and required amount of investment. In the initial phase of his venture, Ruslan started it without any kind of financial backups, such as investor’s money or loans; instead, he used his own money to do it, which inhibited the initial speed of growth for QA Mentor. Having faced that, he suggests that the budding entrepreneurs invest wisely for accelerated expansion in the business idea they believe in strongly.