Home » Ben Eazzetta: Developing Deep Learning and AI to Secure the World from Security Threats
The 10 Most Prominent Personalities in the Security Industry, 2018

The occurrence and severity of cyber-attacks and terrorist incidents have risen significantly in the last few years and these attacks are surging in volume and variety. With security risks increasing across the globe, numerous attacks are targeting the public, ranging from active shooter, bombings, or even vehicles used as weapons in cities such as NY, Las Vegas, Boston, Amsterdam, Paris, and London. The determination of the terrorists and the advancing digital technologies, which allow terrorists to know exactly when and where to attack, are leading to more casualties. The radical groups are also able to communicate through social media channels enabling them to set up these events in a more coordinated manner. Such technologies are becoming deadly threats against nations and the general public and as they advance, so does the sophistication and precision of attacks.

The world needs good and brilliant people to fight these advanced and coordinated terrorist groups. Living with the mission to safeguard such critical assets from the World’s dynamic threat environment, Ben Eazzetta, the CEO of ARES Security Corporation, is one person who is developing comprehensive solutions to ensure homeland security and business continuity against an entire range of risks that jeopardize people, revenue, and operations.

The Path Towards Making a Difference in Conventional Security Solutions

Ben Eazzetta has always had a strong interest in public safety and security. As Ben’s father was a Mayor and a Fire Chief of his town, young Ben had grown in his father’s shadow and his group of public servants. Soon Ben recognized his career orientation in the field of Public Safety and Security. The enthusiastic personality commenced graduation in Nuclear Engineering and further completed a Master’s Degree in Mechanical Engineering from The Georgia Institute of Technology.

Following his extensive achievements in college, Ben has now become an experienced executive who specializes in strategy and growth of the security industry as well as security software development for nuclear, public safety, seaports, utilities, and government. Because of Ben’s distinct desire to support and safeguard people lives, ARES Security Corporation was officially established on October 1, 2012, as a stand-alone company to deliver the AVERT solution to its existing government clients while investing in future technologies and growing its commercial security market. Moreover, in 2013, ARES Security Corporation acquired a majority ownership interest in The Mariner Group, a company that provided advanced situational awareness solutions to ports and other critical infrastructure.

Ben and the other ARES Security Executives have had a long history of working together on some of the largest Public Safety and Security projects globally including the NYC 911 System and MTA Security Systems. As a well-seasoned team, the CEO and his team realized that the security software market was way underserved with outdated technology that was not fit for purpose and lacked the vision for what could be accomplished. Ben and his team strived to build a better infrastructure for security with the utilization of advanced software and hardware capabilities. As a result, the ARES Security team further developed their quantitative risk assessment product, AVERT, that is accredited by the DoD, DoE, and also has a DHS SAFETY Act Certification. The AVERT software creates 3D models of facilities or entire regions and simulates terrorist attacks, insider threats, and even natural disasters to determine vulnerabilities, assess the ROI of new purchases or plans, and evaluate response plans and SOPs. Additionally, Ben’s company has a strong Command & Control platform, CommandBridge, that integrates a wide range of systems and sensors to create customized awareness dashboards for agencies in numerous industries. These solutions along with others have helped ARES Security to make great progress towards its strong vision of being able to fight the next generation’s war against terrorism.

Tackling Challenges with the Inspiration from Role Models

Blessed with many mentors and role models, Ben has had the opportunity to work with visionaries such as Jim Taylor and the other founding executives of Intergraph who really changed technology and public safety globally as well as Richard Stuart, Chairman of ARES Security. Comparing these role models with his current team, whom are overly dedicated, Ben feels that they are all daily role models for him. According to Ben, the main strategy in building something that will make a difference is to remember why you are doing it and that it is bigger than you. So when things get hard and more complex to resolve, he remembers his team’s extraordinary commitment and the ARES Security tagline, “Protecting the World’s most critical assets” which both make the challenges seem small and worth the effort.

Furthermore, Ben believes that to become a noble leader, one needs to find a great team of people, support them to do their job, and make sure they understand their contributions. A leader should not and cannot do everything themselves but has to depend on and support an amazing team to make the magic happen.

Leading Ahead of Threats with the Full Suite of Security Products

ARES Security Corporation is a dedicated software company that is focused on creating a full suite of products for security. Its comprehensive products provide a suite of advanced assessment, training, and real-time situational awareness software that is fully integrated to give security forces the best opportunity to prepare, assess, and respond to events in a common environment. Ben believes that the Security as a Service, Advanced AI and the integration of a wide range of systems will provide security responders with technology to battle the growing threats and keep property and more importantly people out of danger.

As part of ARES Security’s planned deep learning and AI development, the company will continue to utilize advanced technologies for enhancing their suite of software. The leading security software company plans to integrate the detailed site information and temporal sensor data, which is modeled in AVERT, with the real-time sensory data from CommandBridge to enable “real-time security optimization”. This will allow first responders, military and security forces to prepare for and possibly prevent future war and emergency scenarios that will play out as simulations in minutes. 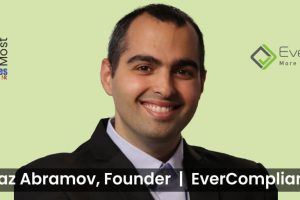 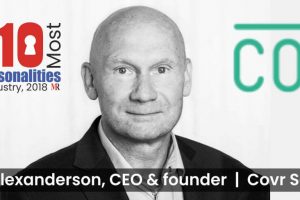 Peter Alexanderson: A Cybersecurity Leader With Feathers Of Experience In His Cap